The future of IM thread got me thinking about the old mass starts. Even Kona has now gone for a wave start. Are any races still using mass starts?

Terrified of them but what a rush and that massive feeling of relief when things settled after 4-500m.

4 were pretty rough but more than manageable.

The other, Wales 2012, I took an utter beating. Due to people legging it along the beach in 2011 they put an extra 90 deg turn about 100m so you had to swim out then hook left for the long run to the first main turn. It was the old style very wide start with a run into the sea and it was carnage to that first turn.

We were literally log jammed, you could have walked to the turn on the back of 100m of solid flailing neoprene going nowhere. Think I’d quit the sport and vowed ‘never again’ 5 times before I finally got round that buoy.

Thoughts, reflections on something that will soon just be a memory for old timers…

The 113 was fairly chilled and wave starts.
Outlaw was mint! There’s no other feeling like it, although I did realise that people are now a lot more aggressive in the swim. Tonnes of folks were really fighting for “their” line and had no problem swimming into you and over you.

I love a mass start for exactly that reason. If I see someone ahead of me I know they’re beating me. With wave starts I kind of have a time trial experience where it’s you and the course and you see how you’ve done after it’s all said and done.

I thought all Ironman events had gone with rolling starts now. Maybe not Lanza as that’s owned by Club Le Santa isn’t it?

Lanza is still a mass start. It’s quite a narrow start funnel, so it can take quite a while to get to the water if you start too far back, but there’s plenty of space to swim wide of the markers, so I’ve never had a problem there.

The worst mass start I’ve experienced was Nice in 2009. Basically, instead of letting people spread themselves across the full width of the start area with the fastest people at the front, the start was divided into narrow pens by estimated swim time, so you were fenced into an area maybe 5m wide with 250 people who expected to swim within 5 minutes of each other. Add in the pebble beach that was uncomfortable on the feet and the fact that the beach dropped away sharply once you hit the water and you were guaranteed a brawl. It didn’t help that the first turn buoy was 1000m out to sea and barely visible from the beach, so everyone had a different idea of which way they should be swimming

I have not done a big mass start before. Some OD distance with possible 300 people being biggest. Hopefully experience Lanza 2020.

I would like to experience it, I did play water polo, so quite used to a bit of a scramble… but the I did manage to get kicked by just one swimmer in Hamburg.

I did Lanza in 2018. Prior to the race the mass start was high on my list of worries

. In the week leading up to the race I did a number of practice swims and got some (free) coaching from Swim Lanzarote (Paul) to help mitigate my fears.

On the day it was epic…a really great memory. There was a bit of biff to the first bouy but nothing too bad. I think a rolling start would have detracted from the experience so would be sad to lose it.

However, when collecting my bike at the end I spoke to a couple of people who had to withdraw due to injuries sustained in the swim (kicked in head), although one had managed to finish the bike 🤷. They blamed the mass start, but I guess you can still get problems in rolling starts.

There is nothing like the spectacle of a mass-start swim in Ironman. I understand why they’ve done away with them, but the spectacle is just not the same. These days people would probably say less ‘epic’, regardless of whether that’s the right word.

Everyone has the same start time, no timing mat (at Lanza at least)

Chips all go live on the gun.

The big difference I felt with the Rolling Start in Hamburg was less nerves; I was stood maybe 150-200 back in Pen 1, and the event was underway and I was just waiting my turn, more calmly than waiting for the cannon and melee.

Not that I’ve ever had a trouble in the ‘melee’ of a mass start in an Ironman; in fact your drama in the rolling start in Hamburg shows that it’s often just ‘wrong place wrong time’.

If you’re doing Lanza next year you should make sure you get to the start funnel early or you could find yourself a long way back at the gun. I made that mistake one year and I think it took a few minutes before I actually reached the water.

I bet Matt would love that

I bet Matt would love that

My current prediction is Gold: sounds like it may come in handy in Lanza, better get that swim a bit faster or I will be swum over by half the pack 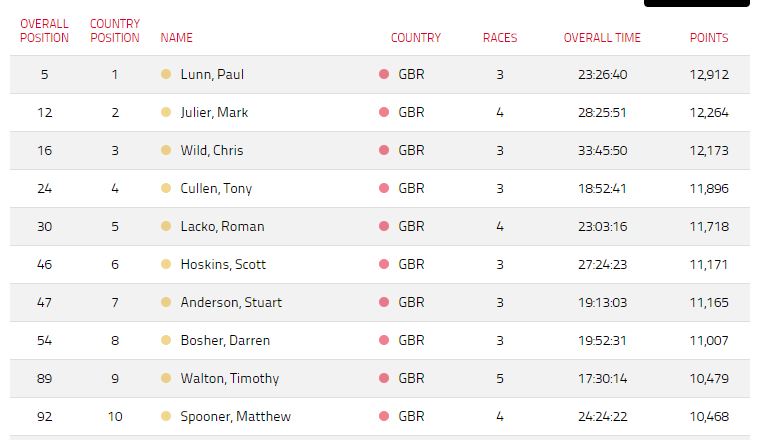 I thought it was best 3 races to count? Otherwise it does just become a frequent flyer scheme.