Swim wave timings came out late yesterday. Saturday 7:20 for me
@Matthew_Spooner are you in 50-54 this year?
Who else from here is going? 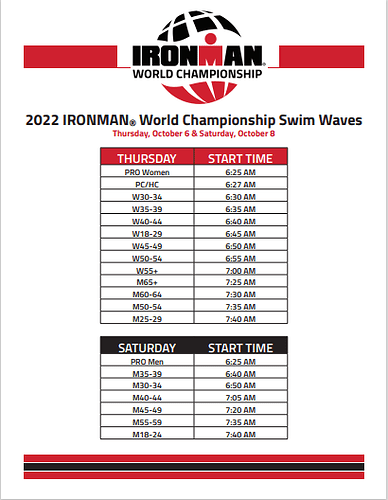 I ordered the new doors and booked the builder in last night. Kitchen fitter to be paid, too

Good gap of 15mins there, not likely you’re going to catch many from the wave in front

Crikey that’s misery for M50/M55 waves. Get pummelled by a wave of bright young Uber swimmers coming from behind in the swim, out onto the Queen K as the last turkeys in the shop (worst of conditions too), then finish to find all the post race grub hoovered up.

This is going to be a problem for other races with age-based rolling starts rather than swim time rolling waves. I think Lanza is going down this route so an old un-talented swimmer will be on the bike maybe 90 minutes after the first of the younger people, lonely day out there potentially.

No, I think there just aren’t many 18-24, so they don’t care. All the Thursday gaps are 5min. So Matt gets to weave in and out of old men and women all day, but he does get to watch the men’s pro race from the roadside.

Is this the proper calculated age group starts?
So the fastest go off first and don’t mess with anyone else’s race?

My mate turned down his spot

He said he wouldn’t feel worthy of it.
I did tell him he’s being ridiculous and has as much of a right to be there as anyone else.
I’d have loved for him to go - living vicariously

St George and then the 2 days @ Kona the to deal with the backlog of qualifiers from the last couple of years. Don’t know if it will continue

They left M45 until last at Nice 70.3 in 2019, worst of the swim conditions, hottest part of the day and all the ice at the aid stations had been used by the people in the cooler conditions!

all the ice at the aid stations had been used by the people in the cooler conditions!

All the ice had gone by my second lap, so they hardly had any in all honesty. I only got ice once

As to whether it will continue: it is not currently scheduled to and we are due the normal 1 dayer in 2023.

But I suspect Messick would absolutely love to use a successful 2022 to run a 2 dayer from now onwards; must hugely increase profit and of course would bring KQ within reach to the ‘top 10 sort of guys’ again at standard races.

I saw this yesterday. I am 50-54, so 7:35 Thursday. Im pretty happy with 25-29s chasing, means i might be able to jump on the wheel of young uber-bikers. However, there will be lots of passing the older age groups.

Plan on Saturday is to volunteer as a marshal.

A little frustrated that i am almost last wave, as @jeffb said i was in last wave in Nice, hottest part of day, no ice, volunteers at the aid stations were hot and tired.

I Kona, ill probably be getting onto run around 2pm, so its going to be a brutal run

However, there will be lots of passing the older age groups.

ride safe and give them a wide berth…

Sounds like IM might be getting a bit desperate… sounds like they’ve been emailing AWA Gold members from last year offering them a slot at the Utah 70.3 worlds in May…

Yep, I got that.
It’s for the delayed 2021 Ironman world championships rather than the 70.3
I qualified for this when I raced Portugal last October but turned down the slot.
Giving some serious thought to accepting it this time. St George looks awesome and it would certainly inject some much lacking motivation at the moment.
However, accepting this slot would put me (and the others who accept) in a ‘wildcard’ division where we couldn’t compete for podium or even places within the AG race which does put me off a bit.

So would you be racing with the other 1000 odd who’d signed up for a normal AG race which turned into the world champs.

It’s going to be a strange race if they are keeping the WC and normal AG (plus anyone else they can round up) in seperate waves.

Think I’d take it - I’m already doing 70.3 worlds as I’ve always had St George as a bucket list race but would rather do the full IM with it being WC an added bonus. But only silver AWA so no invite….

Apparently they’ve now removed the stipulation that those racing on invites will be in a different wave. So if I sign up I’ll be in with those who qualified and those who signed up when it was a standard Ironman.
It’ll definitely lack the allure of a bona fide WC event but I think it could be pretty cool as a place to visit and a potentially great experience.
Would get to see Skipper win too!!

That sounds better. It won’t be a full on Kona, but it’ll be way more stacked than any ‘other’ IM. First WC since October 2019 and a new course/conditions dynamic so they’ll be a tremendous buzz around the pro race.