A question for those that have more of a clue than I.

Whilst reluctantly I agree that this needs to be done, this does also seen like the perfect opportunity for me to also acquire what I have been hankering after for quite a while.

While we have plenty of Sonos components, I also fancy try to have a decent sound system that will play some vinyl. I have never had a decent record player previously but there is some really rare stuff that I want to be able to listen to which isn’t available on Spotify.

My questions as follows:

I appreciate that with sound systems money can be no object

I did this recently, with the exception of the turntable and did a lot of reading on best buys and going for those. I have:

Denon X1600H AMP. This can have up to 7.1 channels. It also has dual zones. So you can have 5.1 channels on 1 Zone and then play something totally different on Zone 2 (e.g. speakers in garden or kitchen etc). The Denon have an app called Heos which will let you connect to streaming services. The annoyance for me is it doesnt include Apple music. I get round that by having it connected to Alexa and alexa streams the music via the amp. It has Bluetooth, wifi and ethernet connectivity, It takes a standard phono style headphone in the front or you can connect BT headphones to it. This was about £500, its entry level for an AV amp but has a lot of features and a decent punch. The sound is excellent and it has plenty of inputs

For speakers I went for Wharfdale DX2. I was a little limited on space, or what the wife would allow. These are quite small but pack a punch and the active sub can rattle the windows quite easily.

I am very happy with all it of. Im probably a bit of a Samsung fan boy but I cant fault their products. The amp is really great.

If you dont want full surround then a more simple audio amp would do rather than an AV amp, if you want sound from the TV though it will need an input supporting ARC though.

For a screen you can’t get much better than the one I just got at that size. LG C1 48"

If you want surround sound, then you’ll need an AV receiver and speakers. Most new ones come with wifi/Spotify. There’s a lot of choice here and depends on budget.

You can plug a record player into an AV receiver may need a separate phone stage. This is what I have done. Rega RP3 or Rega RP1 are good for the money.

If you just want 2 speakers, you can get an 2 channel amp with wifi/Spotify and connect to TV and record player. Again lots of choice depending on budget and space.

I like your style, agree the budget then fill in the details.

Not a question anyone has asked but I can highly recommend a Chromecast Audio as part of your hi-fi setup.
Great for Spotifying from your sofa with your phone and playing through your hi-fi amp and speakers.

when we move we won’t have either a satellite dish or a TV aerial and frankly I’d prefer not to bother with either. we’ll have a FTTP connection so a streaming device is the best way forward to link into the Sony 4K TV.

I have Chromecast audio devices but not used the Google TV version although I am familiar with Roku as we have that on a dumb TV in the current dining area. never used Apple TV

thoughts on which way to go - Google, Roku or Apple???

Roku is service agnostic and good quality. Brother is a tech geek and that’s what he chose.

I’m comfy with Roku and Chromecast and I’m kind of torn between the 2 - price difference isn’t that much and both much less than Apple. Roku is leading at the mo purely down to the fact you can power them via a USB feed which the TV has rather than using a 13A plug on the Chromecast - less cabling really!

I’m also looking at a pair of these for my new study setup - won the What Hifi speakers of 2021 in their price category. will replace an old pair of Ruarks linked to a Chromecast via mini-amp which is a bit cobbled together. 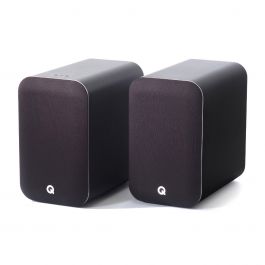 I can recommend the Fire TV cube, cant believe theres much margin in the hardware from Amazon for the price.

I’ve use passive Q Acoustics 3010s as the front speakers. For the price they sound brilliant. Not heard those but would assume they’re good too.