Right… Help me out…
Some others of you on here must have faced this issue before.
All my bikes are rim brakes. There have been one or two occasions over the last few years when I wished I had disc brakes (descending Hardknott during Tri X in the pissing rain comes to mind– I ended up having to walk down!) but generally my rim brakes have been fine.
In terms of tri bikes I previously had a Canyon Speedmax but the integrated rim brakes on that were so dismal that I ended up having a horror crash at IM Wales in 2017. After that I specifically wanted to move away from integrated brakes towards something with more stopping power and which was easier to adjust. I got a P3 with got the Magura hydraulics which do the job and suit me fine.
Back in 2013 I got a 606 firecrest wheelset and in the years since then I’ve ended up picking up an 808 front and a super 9 disk. The plan was always to sell the Super 9 but that never happened and it’s still up in my spare room and has only ever been used 4 or 5 times. All of the wheels are in great condition.
My P3 spends pretty much the whole year on the turbo and gets a lot of use. I know that at some point it will need replacing. I like my P3 and I like my wheels and but it seems the move towards disc brakes on tri bikes are forcing me into an unwanted decision. Do I flog my P3 and all my wheels now before they depreciate even further and make the jump to a disc brake tri bike and a reduced selection of wheel choices? Or, do I buy another P3 now before they disappear and have a ‘turbo’ bike and ‘race’ bike and continue to ride my rim brake bike and wheels for the next decade?
I don’t need a new bike but I’ve got the itch. This year has been shit and I want something new and shiny that I can pretend will make things better.

This year has been shit and I want something new and shiny that I can pretend will make things better.

That was pretty much my reason for finally getting a nicer roadie earlier in the summer. I’m so glad I did. It’s been great being motivated to get out and ride it, whereas I’d slipped into a habit over the last few years of only really riding outside to “train”, and that largely meant my TT bike.

I bought a new rim brake bike, and went with a reasonable expensive one with di2 etc. I’m like you. All my bikes are rim brakes, I have a number of wheelsets, and I like being able to swap stuff between them and do my own maintenance. I can’t see me reaching a point in the next 5-10 years where I’d have no choice but to get a disc brake bike, and I’m perfectly happy on rim brake bikes.

Some people want to make the switch, and if that’s somewhere in your mind, then I’d say go for it. But for me, I actively want to stick with rim brakes simply for convenience and ease of use, so that helped shape my thinking.

Can’t say about disc brakes as I have never ridden them nor do I want them, for me it’s a P3 with cables for brakes and gears. I tried a Speed Concept but couldn’t adjust it so am back to tried and tested. I just don’t have the know how to maintain high end kit and runnin* around the day before a race to get someone else to sort it is not my idea of fun.

I’m sticking with my Giant Trinity for tri and TT for me I cannot think of an event where needed extra braking capacity (apart from Zel am See 70.3 in the pissing rain).
I would consider a road bike with discs in future but I’m happy at the moment.

Yeah. I’ll be sticking with rim brakes for the foreseeable future. Had considered buying a new TT bike over the summer and old P2/P3 would be top of my shopping list

Interesting comments from @stenard there - as he rides abroad often (?) and has done some big climbs, with what I’d assume to be quick descents.

I have ONCE felt the need for disc brakes - and that was this summer, at the end of a ~200km ride when it just started chucking it down as I descended the Cat and Fiddle in the wind, fog and rain on carbon wheels.
If I’d have had alloy wheels on, it would have been fine.

Around a decade ago, I was with a group descending The Roaches A53 into Leek, where we hit 50mph.
Someone came off, broke their hip and was airlifted to Manchester Hospital.
I then came off, on the flat, in a Cat 3/4 road bike race.
That put me off work for two weeks (I went back after a week, but people complained about the bandages weeping, so I had another (paid) week off work)

Since then, I became self-employed, so my aversion to risk increased (not working, no pay)
This was heightened further by the previous two incidents.

I do not descend quickly at all, or take any risks whilst doing so.
If it’s raining/windy, I tend not to ride in the hills anyway, just heading to out to Westchester instead.
When it’s nice and dry, I love the hills, even though I’m awful at them!
I have only the aforementioned once ever wanted discs.

(But the lack of cables with discs looks amazing)

If you want a new, shiny bike - why not get a nice bling roadie/gravel/tourer or something?

If I’d have had alloy wheels on, it would have been fine.

This maybe has a bearing. For ease of cross compatibility, all my wheels, even race wheels, are alloy brake tracks.

I have an old P3 on the wall never moving, you are welcome to ride it any time, kind of sort of pointless being there but seems silly to sell it in case I do suddenly want to ride.

Ooh, think I’ll take you up on that!

Don’t know if it helps any but my 2c.

I have quite a few bikes, mountain, summer, winter, gravel & TT.

My TT bike is my only rim brake bike, I would like my TT bike to be disc but can’t justify the cost & I think discs on the TT would be the least beneficial on any of my bike types.

Many thanks all – all of your thoughts roughly match my own which is reassuring. I was just keen to make sure there wasn’t an angle I hadn’t considered which might swing things in favour of selling off all my current stuff and switching to disc brakes.
@Duckhen I’m totally with you on this one it’s such a relief to be riding a traveling with a bike that I can fix and maintain myself. I’m done with super integration I just found it a massive stress.
Thanks again

But then again I have just seen the new Scott Plasma

I love that new colourway on Sebi’s bike (don’t know if it’s standard or not). 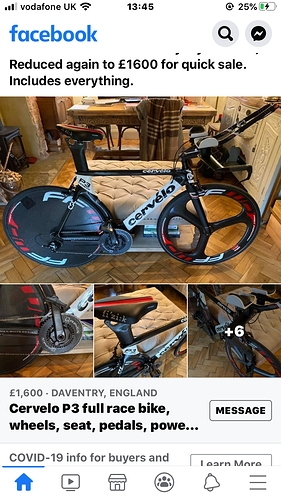 that looks a mighty bargain!

Buy it and sell it again in parts!!

I’ve just sold a load of stuff, but have done what you suggested recently I ended up with a dura 9100 chainset and a set of wheels for nowt… after I had paid for and stripped the original bike.

I’ll probably sell it and get a disc break tt bike, expensive at the min but I’m a worse descender than poet… people walk past me down hill !

Following this thread with interest

get a disc break tt bike, expensive at the min but I’m a worse descender than poet… people walk past me down hill !

I guess you must be on carbon rims? That’s the only occasion I can think of where the actual stopping power could be a limiter. On alloy rim brakes, it’s never a case of not being able to lock the wheels up if I wanted to. And if you can do that, then rim or disc is largely irrelevant (I know sensitivity of actuation is often raised as a benefit of discs, but I don’t have any problems getting rim brakes to produce as much, or as little, stopping power as I want).

People will talk about weight of the alloy rims, but on the bike I bought, the exact same bike, just with the equivalent disc brake wheels, is 0.54kg heavier overall. That would basically offset the weight saving of carbon disc brake rims, so I am fairly clear in my own mind that alloy rim brakes versus carbon wheels with disc brakes are a fair comparison. If you go carbon rim brakes for the weight saving, then you just have to accept the compromised braking performance (in the wet)

28 mm tubs running 80 psi made more of a difference than any brakes to date.

The grip is amazing, I appreciate and agree with all your comments…

Next year IMUK is the B race, but I will improve 2019”s bike split if I can stay off the brakes across Belmont and down to the reservoir … that’s quite a distance.

At my age I’m always going to be a slow descender, I’m mostly on xentis rims with cool stop orange pads, very similar to alloy in the dry, there very good, a shade worse in the wet, but not much.

I’ll never enjoy going down hill fast, just as the 110 kg guys will never really enjoy climbing, but it’s a work in progress.

I’m old fashioned in the sense that my worse ever… bike split came on my newer argon, I got it for pennies so could easily get my money back, so I’ll just get rid and go again.

Is that you selling or looking to buy?

It’s a screen shot off Facebook market place, it’s not mine, lots of p3”s mentioned so thought I’d put this up.