No real chat so far on the resumption of the season.

Roglic looks pretty impressive. Hadn’t realised Dumoulin had gone to jumbo visma as well. I said yesterday to some friends that they were building a Sky-esque team for the tour. Then Kruijswijk goes and dislocate his shoulder today.

Bennett did well at Lombardia today though.

Talking of Lombardia, the Evenepoel crash could have been so much worse. He’s “lucky” to have only broken his pelvis. He could have fallen a much much longer way 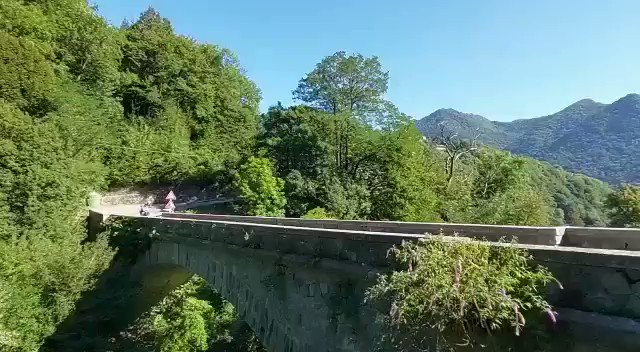 (don’t know why it’s showing up like this. If you click the brackets it should take you to the video)

Carnage as well with Schachmann being taken out by someone driving their car on the course.

Ineos look relatively fragile. Bernal is clearly the only one in great form. Sivakov looks decent too. G has said he’s well overweight, and Froome is way off the pace. How things pan out come the Tour is going to be pretty interesting. The Covid situation should mean things being significantly more open. Only two weeks to go now.

I think ineos are playing mind games. Looks like a training session with them backing off to just get racing miles in. Might be wrong. I have struggled to get into the racing so far though. Its like early season races so far for me.

Wout van Aert is going to be a hell of a domestique in the JV squad too. Great one day rider since the restart and the efforts on the front yesterday and again today having previously been dropped seems to show he’s ok in the support role.

I’d guess they’ll try and get him in a breakaway to reward him in the TdF, assuming anyone is daft enough to let him get in a break.

Feel really sorry for Mads Pedersen not being able to show off his rainbow jersey this year. If they don’t happen in Switzerland this year will he get to hold on for the 2021 season maybe?

I have a feeling Ineos will ride into form, using this to peak at the right time. Roglic looks almost too strong, maybe peaking too early?

Yes i agree. I am almost suspicious of Ineos’ poor form right now.

They and JV look so well matched if they’re all equally prepped, so it’ll come down to who has their training peak just right. And Ineos tend to get that bit right, don’t they?

Roglic’s break in Stage 2 was mental - truly brilliant.
I hope Krieswijk (spelling?) recovers for the TdF.

Ineos do seem to be massively sandbagging…however, TJV have just copied the Team Sky playbook. Get to the front, drive it, control it.

I wonder if Ineos have another play?
Thibaut Pinot is looking good, not sure on Alaphillipe - although he might just be knackered from M-SR and Strade Bianche?

Either way, I’m into it!

Really can’t wait for the Tour this year. If Ineos are sandbagging they’re doing a great job of it!

I’ve followed Ineos/Sky since the their inception and pro cycling itself for a good 40 years. When Sky first formed they were a very British team. Good core of British riders and staff. I wonder if that’s been diluted over the last few years and some of the team spirit is lacking? Something doesn’t quite feel the same over the last couple of years.

Only caught yesterdays highlights by chance - great to see racing again. I had to double check it wasnt a past season

Its kind of weird the TdF starts at the end of the month. Whats the key factors that might cancel it again? An outbreak in the teams?

What happened to Brailsford saying he wanted to win the tour with a french rider…?

There does not seem to be much love for Sky/Ineos from the french, do you think a french rider would go to them? Is there a french rider that could lead Ineos?

Sivakov what a ride yesterday

Pavel Sivakov is Russian and also a French citizen…

Sivakov what a ride yesterday

He should not have been allowed to descend with an unsafe bike, in the same way sports have concussion protocols.

Like when most cyclists crash and hit their heads, then carry on riding hundreds of kilometres maybe with concussion?

Cycling does have a concussion protocol now, but yes I think it needs extending to other safety related features, at no point should sports be allowing people to ride unsafe equipment.

I missed the bit about unsafe bike, what was the issue?

I agree that cyclists with concussion should not be allowed to continue, and unsafe bike must be replaced

What about Remco Evenepoel? Horrible crash, really hope he can get back fully. He looks like one hell of a rider.

I think quite a few rides will be in better form come the Tour including Ineos and Quintana. I hope JV haven’t lost too many riders by then.

His chain was jammed and rear mech looked proper mangled as he sailed down the hill trying to catch Julian.
He kept looking down at it, which is proper dangerous when descending, innit.

Surely you’re missing a wink there

Did he swap bike at some point? I didn’t see the whole stage He went down hard and yes possible concussion. These guys are nails!

I missed the bit about unsafe bike, what was the issue?

Also no front brake as the lever had snapped off!