Not sure I’ve seen this but it could also be non-wetsuit!

Apparently it’s currently 25.4c and one of the lock gates is broken so they can open it to cool it down, they are telling people to prepare for the first non-wetsuit Roth swim.

A lot of people visiting the pool to practice kicking for balance!

One day I’d like a non-wetsuit swim, preferably 70.3 just to see how I fair, I’m not brilliant at kicking but do kick a bit for balance.

Praying for a mechanic to turn up and fix the sluice gate!

Non-wetsuit swim is my stuff of nightmares

Therefore, it is important to be prepared for a non-wetsuit swim for the first time in our history. For the safety of athletes, wetsuits are not permitted in temperatures above 24.5°C. We’ll keep you posted on any updates as they happen.

most years they say possible non wetsuit ,then race day it was .1 under allowed temp

One day I’d like a non-wetsuit swim, preferably 70.3 just to see how I fair,

I’m the same. Certainly not a fast swimmer, but I’d not be freaked out by the prospect. At the ETU aquathlon last year, whilst only 1k, I beat people out of the water who would normally be faster than me in a wetsuit swim

PEOPLE WHO ENTER AN IRONMAN & CAN BARELY SWIM WITHOUT A WETSUIT

I’d keep your eye on the Hamburg weather & Alster temperature Jeff; do you have a swimskin?

I spectated at the aquathlon and that was some swim. The cross tri swim was a beach start so a little easier but no wetsuit and skins were banned

Pretty sure you can walk most of the Roth swim, iirc someone we were out there with went towards the bank when struggling, saw how shallow it was and strolled for a while until they’d recovered and then strolled a bit further, none of the Marshalls/refs said anything about it

Back in my early days in Triathlon (when I had been told by 220 that you should kick your legs properly only at the end of the swim to get the blood circulating) I was confronted by a last minute non-wetsuit swim down at the Bewl Oly. It was actually pretty cool doing it non wetsuit, although a bit intimidating going out into the middle of the resevoir without the safety net of a nice buoyant wetsuit.

Anyway, I shudder at the logic of basically hardly kicking for the entirety of that swim - no wonder it seemed to take forever to get round! I no doubt looked like a forward-slash side on.

Back on topic - as others have said, would love to have another go at a non-wetsuit swim just to put that experience to bed.

I do have a swimskin, bought it a few years ago and don’t think I’ve used it yet. I’m expecting weekly or daily water temp updates!

My swimming really isn’t going well ATM, but I actually think I’d lose less time than some if it was non-wetsuit.

I don’t recall it being shallow at Roth, but I tended to be towards the middle.

It’s shallow on the right next to the path as I remember folk running on the lip/reeds next to the path before diving back in again. There were a few whistles etc from the goes on the kayaks but most ignored it

Ha… I’m not planning to walk the swim, however tempting that might be! There was a fiasco at the Owler Tri a couple of years ago where gravel banks in the shallow lake turned the first leg into a swim run!

@Jorgan: You’re right to scoff… however, the prospect of a non-wetsuit amplifies the pre-race anxiety of a reluctant swimmer. The issue is more in my head rather than physically being capable of completing the event. I’m in an early wave with ambitions for a good time… unfortunately, that’s also an invitation to get massively swam over. Good job I enjoy the bike and the run!

Can’t control the conditions, and a non-wetsuit swim further compromises my weakest discipline. The forecast for race day looks as good as could be hoped for, cooler and calmer than a hot and blustery Saturday.

I’m still massively excited. Fingers crossed I can keep my head in the game and enjoy the occasion

At least you’ll get a swim; Hamburg is looking in jeopardy even 4 weeks out.

I do seem to remember the water looking pretty shallow near the canal banks; it’s not like a traditional UK ‘trough’ shape canal. 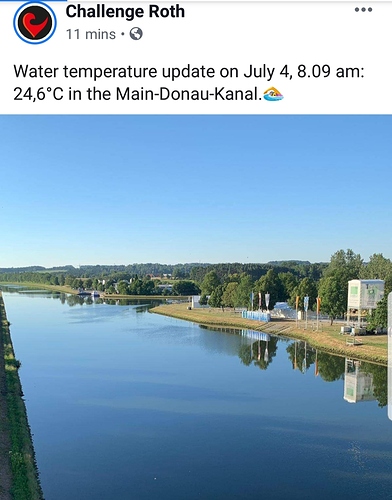 Yeah, i’d like a non wetsuit swim to see how much slower it is. Although i’ve never swam in a swimskin, but i’m still assuming it’d be slower. I normally lose 2-3secs/100m when just in my budgies

wow, that’s looking sweet, very jealous. When you heading out.

BTW, i messaged you re the beer you sent, not sure if you picked it up, but thank you very much, i didn’t expect anything, just trying to help. Good luck this weekend

According to a local media article I’ve just seen, the lock should be working Friday night. Apparently it’s been out of order for 4 weeks after a ship hit it; for the second time!

Don,t panic by hook or by crook the water temp will just be under legal limit

You’re sorted. They have curtailed tomorrow’s morning swim practice so that they can get the backlog of ships through…all that cooler water being pulled through.