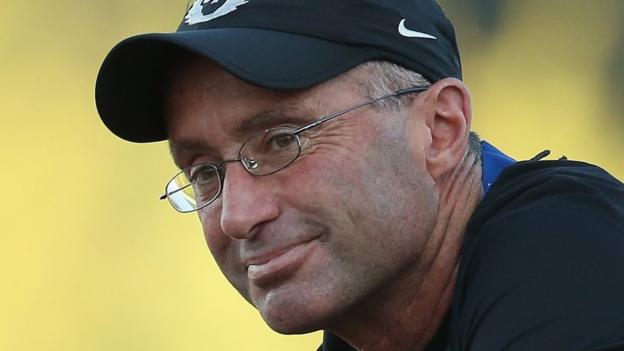 Alberto Salazar, Mo Farah's former athletics coach, has been banned from the sport for four years after being found guilty of doping violations.

Shame it isn’t a life ban, but at least they got him!

He of the magic muscle rub ?

Wasn’t there a very lengthy letsrun thread & dissection of a denial letter from him some time ago ?

What do you think, eJC?

Was he sponsored by Jiffy too?

A journalist tried calling him earlier but he couldn’t hear his phone ringing.

The only thing I am surprised about here is that Nike haven’t managed to make this go away.

As a kid growing up in SA and watching Comrades every year. Salazar was one of the first international athletes to come out and compete post-apartheid sanctioning - and in the post-Fordyce era. He steamed the field. Sad to think that may have all been his testing ground for what he’s implemented now.

What do you think, eJC?

i saw it coming years ago…see posts on old site…

Wasn’t there a very lengthy letsrun thread & dissection of a denial letter from him some time ago ?

Indeed UKA did clear Salazar of wrong doing eJC but that was limited to them clearing Sir Mo Farah of Doorbells and making sure he stays out of it rather than whether anything actually happened.

From one of the articles I read, the evidence/questioning around his “I was using the testosterone on myself for a medical condition defence” didn’t wash and somehow that thread apparently pointed to that he may well have been using testosterone during his career. No surprise there but probably should read the report before taking other’s interpretations of it - presumably it’s buried somewhere in the detail.

I think if you take the time to have a look at the full reasoned decision your preconceptions about Salazar and this case will be challenged somewhat: https://www.usada.org/wp-content/uploads/Salazar-AAA-Decision-1.pdf

It might not be the smoking gun you all think it is.

The Panel finds that USADA has met its burden on the charges of: (i) Administration of
a Prohibited Method (an infusion in excess of the applicable limit), (ii) Tampering and/or
Attempted Tampering with the NOP athletes’ doping control process, and (iii)
Trafficking and/or Attempted Trafficking of testosterone.

I will read it all in due course…

UK Athletics said it will not sever links with the Oregon Project, with its “focus” being on the coaching and support for Farah.

However, UKA said its oversight group had made “organisational and procedural recommendations” which would be put in place in the coming months.

In July, UKA said none of the “extensive information” supplied to the review panel contained any evidence of impropriety by Farah or gave them reason to “question the appropriateness of the input” into his preparation by Salazar’s team.

What is with all of this read this and that?
Can’t we just have people’s opinions?

What are our preconceptions?
What will be challenged?
Why all of the allegories?

Can’t we just have people’s opinions?