Picked up an old 90’s Serotta last year - couldn’t resist the flouro paint job. Been on the hunt for some 650c clinchers for this but it’s proving to be very difficult. Anyone still into this stuff on here and any idea other than ebay where I may be able to pick something up?

Cheers. Happy to document the build. Will be a slow burner… thoughts at the moment are a dura ace 7700 groupset, which I’ll also need to source. This could take forever.

Good luck. I take it you are keeping the paint and not doing a strip and respray job?

For components you could try Gumtree to try and buy a couple of cheap donor bikes to mine for bits.

Welcome to the forum!

That is a cracking paint job.

Hey @GeordieM @Adam , thanks both, I’ll give gumtree a go.

And yep - definitely keeping the paintjob. Am tempted to get it redone though if that’s what you mean- the flouro has mostly faded. The parts that haven’t faded really ‘pop’. It’s really difficult to capture in a photo, need to do it outside it in the shade - I should take a better one… Top tube also has some surface rust. This could all get expensive though for what is basically a bit of fun… we shall see.

Saw a 650 tt bike go through eBay for pennies about 3? Months ago.

Very strange mix of components. Some would have done you proud.

Looking forward to seeing it finished 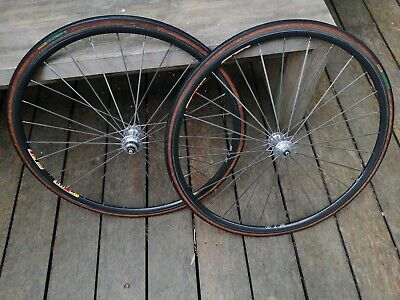 Stunning 650c Aero Wheelset from the 90s. 126mm OLN rear axle. 28H Bladed s/s Spokes that gleam in the sun like no other wheel I've seen. Gorgeous Mavic 501 hubs that are buttery smooth with screw on freewheel thread.

Principia TSC ‘Team Edition’ 650c 53cm. Principia bikes were hand made in Denmark and were verypopular with triathletes in the late 90’s and early 00’s. The complete bike weighs in at 8.4 kgs! The complete bike build was over £3000 and that was 20...


Oh and this Serotta… 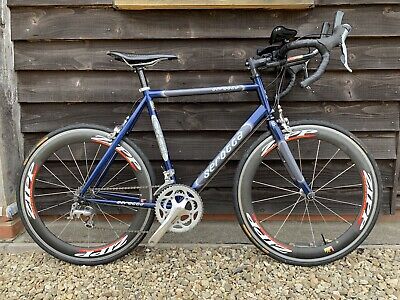 Find many great new & used options and get the best deals for 2005 Serotta $10,000 Triathlon Bike 53cm 7.8Kg Zipp - hardly used! at the best online prices at eBay! Free delivery for many products!

Yeah seen those wheels. They’re really nice, but I want something loud on this - deep rims / trispokes etc…

Be easier and more economical to get the whole thing … sell what you don’t use.

I’d love one… but got too many bikes already

All the full carbon wheels from that generation will be tubular I think.

I’ve got a feeling it will be a struggle but lets see. I have seen some 650 HED Jets that were clinchers, and a HED Deep rear that was in a poor state.

There are some Chinese carbon clincher 650s on ebay, but no idea what the hubs are and they’re not mega cheap so wondering what else I can find before potentially pulling the trigger on that.

3G would be AWESOME. But rare and very collectable = £££

I had a rear only.

Bought it as part of a second hand bike

It worked … ish with shimano 10 speed.

Made the maddest noise ever

Would love to but I want this to be at least semi practical! Hence no discs either. I reckon I’ll end up going down the chinese carbon route and try and not go too deep. But let’s see.

I bought a pair of 2nd hand Zipp 650 carbon clinchers on eBay for my first tri bike which was a 1998 Scott Waimea.

Edit they were something weird like Zipp 400s (or similar). Metal rim, carbon deep section. Ran 7 or 8 speed 105 iirc

Sold it all on eBay too (£380 for the bike, wheels and training wheels- I was robbed) guess they are out there somewhere

Any interest in the Serotta quill stem pictured which is in my rarely used bike bonepile and I have an unbranded replacement I could use? Needs a bit of a polish, but is a genuine early 90’s item.