If you had to buy a turbo now - what would you get and why?
I’ve currently got a Mk1 flux - which despite all the initial problems people had; bar me greasing it up once its been pretty good (bar the odd disconnect on some apps).
Wife is also using it and rota use and bikes on and off is annoying me enough to get a 2nd.

So did the usual DC rainmaker trawl, picked an Elite Suito (mid range price, seemed to tick boxes)… turned out to be a pile of kak. Not even completed assembly with bolts missing so put me right off that brand (I know it shouldnt, but it has).

I want to say I have no budget, but then that should lead me to a Neo2 and that just feels a bit expensive. Do I really need to be paying that to avoid the lottery of the mid priced ranges??

The Saris H3 seems to keep coming back - but the fairly new kid on the block and loads of problems at the back end of 2019 worries me. Tho current reviews seem good and makes alot of lists (albeit behind the neo and kickr).
Do I gamble on another tacx - flux/s/2.
Flux 2 awaiting a new DC rainmaker review.

Wahoos all seem to have had a rough time - but now all settled??

Welcome any thoughts - appreciate there’s no stock anywhere, but want to jump when there is.

My Wahoo Kickr v1 has barely missed a beat and by all accounts the newer ones are quieter/better. I wouldn’t be put off them.

I’ve been happy with my Direto, so would consider the latest generation of that. However, the Neo 2 never needs calibrating and who doesn’t like coloured lights?

I had a Flux, but changed this year for a Neo 2T, which I managed to find with a 20% discount.

The Neo 2T is pretty good, quieter and smoother than Flux. For me biggest improvement is being able to set trainer difficulty setting to 100%, which makes a difference on the hills in Zwift

At first I didn’t like the road surface simulation, but now I love it… I am clearly getting into the whole gamification thing

Why did you change Matthew??
Yeah I’m not convinced by the actual road feel - I love not feeling bumps. But the fact 95% (made up number) of turbo issues seem to come from slipping belts and the like - can see why the Neo is in a different class.
Its just do I want to spent twice the price. I don’t mind spending where there’s value - just not sure I see it … yet.

picked an Elite Suito (mid range price, seemed to tick boxes)… turned out to be a pile of kak. Not even completed assembly with bolts missing so put me right off that brand (I know it shouldnt, but it has).

Strange. My mate picked one of those up at the start of the lockdown and is loving it. Like FatPom, I have the Direto, and whilst my belt snapped 10 days ago, I got a replacement from Elite 24hrs after the Italian postal services were allowed to resume. Not even a question about when I purchased, or whether under warranty, just immediate replacement. Opposite to you, I now have significant Elite brand loyalty off of that!

ETA - what bolts were missing? I thought the whole point of the Suito was you just take it out of the box and it’s good to go? There’s meant to be zero assembly at all. So what happened? Did you just find pieces weren’t properly attached? If so, then I can see why that would put you off the brand regardless of the experience of others.

Unlike Matt, I’m not sold on 100% trainer difficulty. It costs you in zwift races … everyone I know in cat A+ races at about 30-50% difficulty. Enough of a response to be able to respond on rollers, but doesn’t entirely shaft you over the top of climbs or on descents with an inability to put out power unless you make numerous gear shifts. Our best rider (in a zwift club and part of all the invitationals with Ali B, Lionel, etc) says he would always race the Alpe on zero trainer difficulty as otherwise the hairpins will screw you with loss of resistance.

Other thing on the Neo is frame clearance. I can’t use one with my BB mounted rear brake on my TT bike.

I’m currently borrowing a KICKR2 (2016 version). I can just about tell the inertia is a bit higher to the Direto, but in erg workouts they’re a push. Intending to spend the time to calibrate the belt tension on my Direto this evening (I fitted the new belt last night), so I guess the big question will be going from a £1k trainer back to mid-range and seeing if I can tell the difference that way. But when I started using the KICKR, I certainly didn’t go “wow”. It is 3-4yrs old, so the latest ones are probably a bit better I imagine.

At first I didn’t like the road surface simulation, but now I love it

Interesting. I’m sure DCR said only a week or so ago that one of the annoying things about the zwift team was their slowness to respond, and quoted the Neo 2T and not having road simulation as being a prime example … zwift just hadnt clicked the button to enable it. Maybe a recent change?

Unlike Matt, I’m not sold on 100% trainer difficulty. It costs you in zwift races … everyone I know in cat A+ races at about 30-50% difficulty.

The fact you said you like standing the whole time on a different thread would suggest you are a good low inertia, power rider. It is a proven fact that 300w at 100% is exactly the same speed in the game as 300w at 0%. It’s solely feel.

I hate climbing, and that’s why I dislike 100% as it makes the deadspot in the pedal stroke more pronounced (like in real life) and I struggle to hold the same power as I can on the flat. But that’s why you have to use 100% on an official vEveresting attempt, as it’s necessary to simulate the challenge of the lower inertia when climbing.

If you are faster up the Alpe at 100%. then you must have to make numerous gear shifts up and down through the hairpins, and surely must struggle to hold steady power (which conceptually is always going to be the fastest way up, rather than surging)?

I found with the Flux, to get an accurate Power reading, you needed to recalibrate after 10 mins of riding (this was on DCR as well). a little annoying, but not massive issue

Save a separate post! Do you actually use the trainer power numbers? I don’t. I can’t see any reason why people would if they already have power meters. This is a side issue, as clearly if they’re claiming accuracy then ideally they should be, and it’s certainly of relevance for those that don’t have a power meter, but I only ever use the numbers from my power meter as I want everything to be comparable to outside data wise.

I changed for a couple of reasons:
Sold my old TT bike, new TT bike with Disc Brakes and Shimano 8050 rear deraileur wouldn’t work on original Flux. Since most of my winter riding is TT bike on Turbo, this was an issue

I found with the Flux, to get an accurate Power reading, you needed to recalibrate after 10 mins of riding (this was on DCR as well). a little annoying, but not massive issue

Original Flux had a bit of a delayed response on Zwift, this is miles better with the Neo 2T 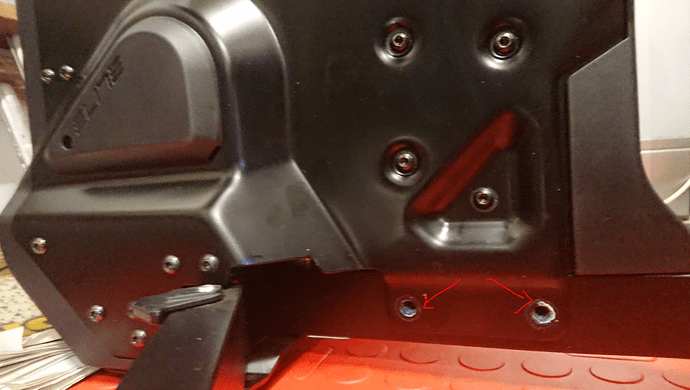 Yeah I do get a couple of seconds delay - particularly around lumpy bits like titans grove.
The flux was ok for the most part in my sufferfest days apart from on very short erg sprints when it just wouldnt react in time.

Kickr starting to feel the safer bet… neo second if I can justify the cost to myself.

So basically 2 big bolts holding the casing in place.

Damn, that is crappy. Seems you just got super unlucky and are understandably done with the brand.
The DCR review images definitely show those as being in place. Who did you buy off out of interest? The markings seem to show those bolts as having been there, but then been removed? Wondering if you got screwed by a shop creating the issue? I know a lot of places re-sell returns, or have stuff out on display that they use to demonstrate repairs and maintenance.

Wiggle!!
I’m guessing it was a return thats been re-sent out.
Yup - I’ve no idea if that was causing the stability - but it made sense the bike was rocking the casing.

The Saris H3 seems to keep coming back - but the fairly new kid on the block and loads of problems at the back end of 2019 worries me. Tho current reviews seem good and makes alot of lists (albeit behind the neo and kickr).

On your OP - the trainerroad team (inc CEO) apparently all use this as their benchmark top end trainer. So that’s a pretty good endorsement in terms of one of the largest apps giving it the thumbs up. I saw Dan Empfield give the H3 a thumbs up on slowtwitch earlier today as well.

Wiggle!!
I’m guessing it was a return thats been re-sent out.

That would be my guess. From the picture, it’s almost certain that the bolts were there at one time, and hard to imagine the manufacturer would remove prior to initial packing. That’s definitely going to cause it to be unstable if the main body isn’t fully connected together. Did you just return straight away? What did wiggle say out of interest?

Well, Id originally logged a complaint (best option I could find) about the stability.
Customer services after 4 days passed me onto warranty team. I was obviously still trying to work it out and whilst checking all bolts were tight, found the holes - so just told them it was going back.
Couriered it back earlier this week (at my cost as no collection service and wasnt prepared to go to a collect+ shop) - awaiting refund. I’m just kinda assuming they’ll be no arguing and I’ll get my money back.
They have the Saris H3 in stock now… decisions decisions.

I do occasionally validate Neo and Assioma measuring power on 2 different head units, just to see how close they are. Neo tends to show a few watts lower. DCR does mention in his reviews that Turbo Trainer and Hub PM will read lower as they are further back in the power train, therefore subject to some power loss

I have an original Neo & never had any trouble. I run at 100% difficulty, I put more value in the ‘training’ I do in Zwift having a real impact on my actual races than I am at getting the best result possible in Zwift where if you are of a mind it is easy to cheat anyway.

Well gambled a bit on the saris (especially as still waiting on suito refund).
Went to sigma and another turbo that’s clearly been opened - bit disappointing when your paying out that kinda cash.

Early impressions, firmware was a doddle to upgrade. And its so quiet (till you freewheel, then it’s like someones rattling a pair of maracas in your ear canal.
Don’t like the itty bitty riser block but only small issue and no QR skewer in the box (bit cheap).
Connected to saris app and zwift pretty quick and all working well.
Give it a proper run tomorrow, fingers crossed!
Thanks for everyone’s comments.
Edit forgot the pic, coz that’s important 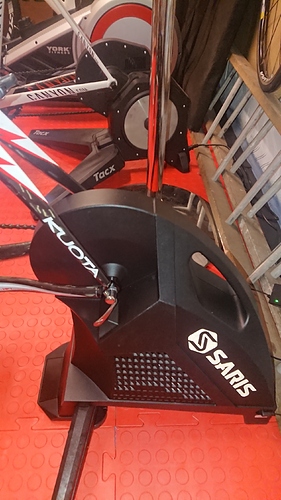