His version of events here: http://www.andrewstarykowicz.com/sanction/

for the ST thread: https://forum.slowtwitch.com/forum/Slowtwitch_Forums_C1/Triathlon_Forum_F1/Starky_banned%2C_TUE_system_is_stupid_P7388113/

I suspect it will descend pretty soon, wonder if Dan will delete it

I took a drug which I knew is prohibited at all times submitted a TUE and raced…okay.

But he was told he could race?

His version of events seems genuine and USADA and Ironman seem broken.

I feel for the guy.

I suspect it will descend pretty soon, wonder if Dan will delete it

Empfield is doing a pretty good job at subtly throwing him under the bus, he set the tone with his ‘seeing both sides’ and then let it it run. So-called ‘in conversation’ with Harold Jacobs, then later admits he’s got nothing (so 'in conversation means ‘my emails were ignored’).

All this is payback for TRS. 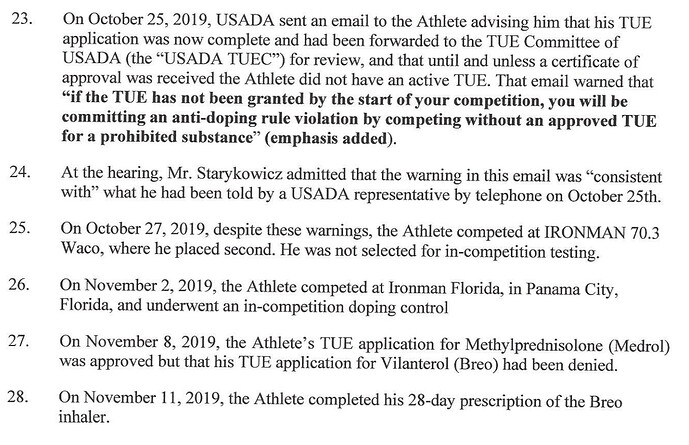 All this is payback for TRS.

Wow, the biggest thing I took from that, is that Starky paid $75k in costs and was banned for the 2020 season… of all years.

Two other observations: where does your average Pro Triathlete get that kind of cash, and you shouldn’t race without a letter (TUE)…don’t be impatient!

I would have a beer with him though. But I’m guessing it’s a complete binary-bitchfest on Slowtwitch?

He’s getting quite a roasting on ST to be fair, including for a statement he made in a Breakfast With Bob interview: “It’s not just ok the guy is taking EPO or something, I consider doping anything that is… like a TUE”

From about 15 mins here: https://www.youtube.com/watch?v=h-BoR3VpvZE

He also goes on to say “If you have to use a steroid inhaler just to breathe, then you shouldn’t be racing”

I’m probably getting him mixed up with someone else, but hasn’t he said in the past that if you need a TUE you should choose another profession?

Yeah and he has publically torn shreds into Michi Weiss for his previous doping violation.

Someone picked up on that on ST. Somethign like “Somewhere MW is chuckling himself to sleep”

Well, that is a good observation. He went from needing ‘emergency’ treatment, to coming off the bike first in IMFL in a matter of weeks. I’ve changed my mind.

I have no idea why he thought he could race, even wrote this:

USADA discussed with me that “I could race, but would do so without an active TUE.” Five hours after that phone conversation I received an email that the TUE form was submitted to the TUE committee for review.

every pro should know until the TUE is approved you cant race if you take the drug. he was basically hoping he wouldn’t get tested before it was approved. Stupid thing to do.

in summary, he’s been a dick, suck it up and move on.

I felt sorry for him initially over the Dubai thing but that quickly wained.

Other than the original poster, who set his stall out in the title then refused to budge on any point and now appears to have backed off from the discussion all together, I found it a relatively grown up discussion for ST.
I had to laugh at the comment about being able to tell who someone voted for from their stance on this though!

All this is payback for TRS

I had never realised before that the Ben Hobbs podcast was borne from this same parody twitter account! Yet seeing the abbreviation written as well as the full written name, it all became so obvious