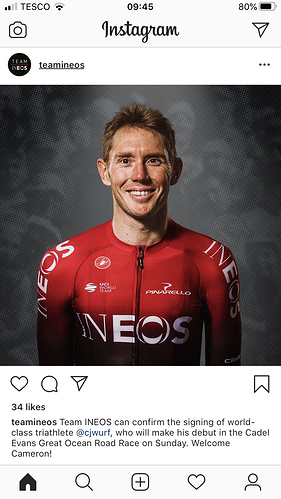 Well, they do have a good program.

He’s been riding/training with with Sky/Ineos for a while, just not racing for them.

Yeah, saw this on ST. As mentioned, it’s just a formalisation of the training arrangement he had anyway. Although interestingly it’s only a few months ago that he said something along the lines of being an official squad member had been discussed, but it was agreed there was little point to either party.

It’ll be interesting to see if Team Ineos start branching into being a Tri squad as maybe a retirement avenue for the pro cyclists? G has made noises about definitely doing Ironman Wales in a few years once he retires from pro cycling, and Wurf has talked about how Froome can comfortably run a half marathon, and they’ve done that in the past to deaden his legs a bit as part of a big block.

He surely isn’t going to be riding a full programme with Ineos. He knows his world champion potential now only really exists in Ironman. He’s never going to win a rainbow jersey on the road

Yeah I was aware he trained and was basically a non official member of their squad. Will be interesting to see what his role will be during races. Surely just a domestique?

Looks like Ineos are building a formidable TT to rival Jumbo.

I’ve been wondering if this would happen… I hope it does… the big teams need to branch out to build more scale, and this would seem to be an obvious angle, along with starting female cycling teams… next step, mergers with, or acquisitions by, other big global sporting team brands?.. pro tri team 49’ers anyone?

I can see how this might work with one day races but any kind of stage race has to impact his swim/run training which has improved a lot over the last couple of years.

or the reverse, and Ineos discover that the run/swim cross training benefits build even faster cyclists, and rachet up the standards again…

I suspect he won’t have too many race days, but will be available to fill up the squad at early season races. This must spell the end of his (extremely long shot) hopes of going for Tokyo 2020 though!

Isn’t Jim Ratcliff a former Ironman athlete? He invested in Team Ineos as he is a passionate cyclist, as a Triathlete, I am sure he would be supporting some move towards triathlon, so long as it doesn’t impact Ineos core. By being sympathetic to Triathlon, and seeing that a few former cycling pros move into triathlon in their retirement, this is perhaps a carrot to keep people like G within the team

Statement on the Ineos website is saying his focus will switch back to triathlon in the months leading up to Kona.

I guess that win back in Italy taking the pressure off him for the early part of the year.

You mean the Ineos 1:59 challenge

I thought cycling teams had a maximum roster size, in which case isn’t it a waste to give Wurf an actual slot? He’s not going to be a 1st line domestique, surely they could find some up and coming junior to fill the role? By all means set up an official training squad link, or even establish a sponsored tri-team, but why do they need him to domestique in 2nd string events?

his focus will switch back to triathlon in the months leading up to Kona.

Hmm, he’s gotta be cross training before then somewhat surely.

All his interviews say that Kerrison has always fitted him into Team Sky/Ineos training camps with swim and run also in mind. They’ve even just done long rides out to lakes, and whilst the cyclists are having a bit of nutrition/recover/massage, Cam would get a swim in.

Having your tri coach as the coach of the pro cycling squad you just joined is certain to mean swim and run are not overlooked.

And who knows. Maybe he needs the money??

You mean the Ineos 1:59 challenge

Shows how little attention I pay to sponsors named events these days I guess - oops!

I think the prospect of an ineos triathlon team is interesting. That been said there will be a lot of anger if Ineos funds a triathlon team before a pro womens team.

Whatever happens i really do hope he races without socks