So that others may learn, or sympathise!

So apart from loose valve cores and extenders snapping inside the rim, I do have a particularly ‘chilling’ tale that’s non technical related, at my A race. My heart must have gone into zone 3 just standing there in blind panic.

So it was Frankfurt in 2015. I’d decided like a clever old sweat to use permanent marker to make some stripes on the string of my transition bags to make them easier to spot on the racks. Great. Came back on race morning to double check everything was there for the bike…WHERE THE F* IS MY T1 BAG!!! no stripes to be seen. My race was ruined, how was I going to lay my hands on a helmet and pixie sized bike shoes with 1 hour to go. After seeing my time & investment flash before me, I started rifling through the bags wildly…and there it was, right where it should have been, with my Number on it, now in marker pen.

The race staff had taken exception to my cunning plan, and changed my bag with the stripy string. I then peeled myself off the roof and the rest is 40 degrees in the shade history.

Bike had worked great day before local sprint. Morning of sprint go to rack and realise I cannot shift gears. Friend who is a good mechanic swooped in to the rescue and with minutes to spare found that my sugary drinks had leaked, and created an incredibly sticky mess under the bottom bracket, sealing the cables tight. He cleaned it all off, got it working, and 15 minutes later I was riding it.

Not technically pre race but Outlaw 2014 - rear tub flat in T1 - used pitstop to get me going. Ten minutes later and I get that horrible sinking feeling again, cue panic and horror as I’m up shit creak now. Nursed it to a marshalled corner where one superstar marshal from a local tri club very kindly lent me his 404. Amazingly got round with no further incidents. Outside assistance at its finest

Not me, thankfully, but many years ago at London triathlon I saw someone coming out of the swim and realise to his horror that he’d put a D-lock on his bike when he’d checked it in the day before because he didn’t trust the organiser’s security arrangements overnight. He then had to try to find his wife, who had the bag with his keys in it

Another lock related drama from last year’s London to Paris. A guy from Kent decided that he’d save time in the morning before driving to Esher for a 5:30am start time by loading his bike into the car the night before. Concerned about the security of his bike while on his drive, he put a lock on the bike. When he arrived at the start, he realised that he’d left the key for the lock at home, so he ended up driving back home and then cycling out to intercept his group on the course.

Outlaw 2017, first IM distance race, I had packed my bike with wheels off in the boot. To take the rear wheel on/off with a 25mm tyre on I had to deflate it. Whilst inflating it I was rushing, I somehow moved the valve and far ripped it away from the tube, psshhhh. No panic I have spares right here in the car. Proceed to change tube, inflate and take into T1. Next morning I have a decent swim for me, felt great, had drafted loads of the swim and lots of bikes in T1. Grab my bike start wheeling it to the mount line and it just stops and the rear wheel won’t turn

Overnight the tube had pushed up under the tyre bead and was sticking out. Damn it. Only thing to do was take it off and re-do it. Same thing, it was popping up where the sidewall had been rubbed and worn, it must have happened a month earlier on the trailer to/from the Coast to Coast in a day ride but I hadn’t spotted it. I asked one of the OSB guys if they had a spare tyre but they were all on course. I had to run to the Expo, get a tyre from TFN, run back, by which time there were a lot fewer bikes in T1. Luckily for me, the OSB guy had managed to sort it and said if I was happy to ride it to go. I did and had a crap ride after a stressful 46 min T1.

1989 - 1 min to start and my googles strap snapped…i called out to the starter and he delayed the start whilst i ran to the expo stand waving my broken goggles…seeing me come, the vendor hid all the cheap pairs and handed me a £50 pair of ironman goggles…the race started about 10 mins late and the goggles were excellent (until my dog chewed them).

1988 - first tri, got stopped in transition for not having a bike helmet and had to buy one mid T1 (rule change that we didn’t know about)

1991 - measured and set out the swim course the night before a race at Arabs in Akrotiri, only to wake up on race morning and find that the Med had gone missing! (Had to reduce the swim!)

Not sure of the year but guessing somewhere 2004 - 6, the chap next to me setting up transition had forgotten his tri shoes. i had an old pair of road shoes in the car and i loaned him these - and the toad beat me…

Make sure you always have a AAA battery on you; shout net you a few quid at some point

IM Lanza 2015, about 30 minutes into the bike I reached down to take an energy bar from my bento box and realised that it was still in my white bag because I’d forgotten to put it on the bike while I was doing my race morning faff

. The aid stations were all a bit more stressful for the rest of the bike as I now had to grab not just two bottles but also a bar or a banana…

That race wasn’t the best for me, because someone nicked my Garmin 1000 off my bike sometime between me finishing the bike leg and me picking it up from CLS the next day

I’m sure if you had the right contacts, you could find out where that Garmin device serial number is if they uploaded from it onto the Internet.

Probably not worth doing a ‘Brian Mills’ job over it though. “If you post it back to me, that will be the end of it. But if you don’t., I will look for you.…” 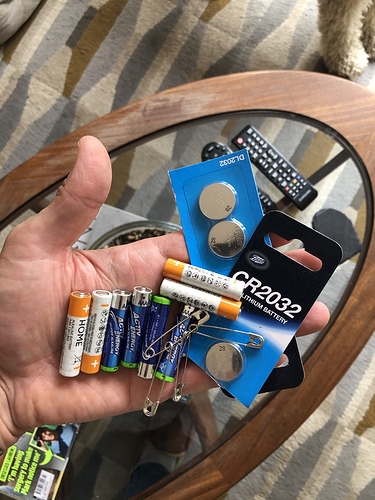 Just about to go into the TriBag

Thing is, whilst I wanted one, I didn’t stress about it and had a great bike

Oh!!!
I got mugged a week before race day, massive black eye, and it hurt to wear my goggles!

Remember the bridge that attacked me a week before Austria, ending in an ambulance ride

Racked my bike at Maastricht last year and whilst faffing about saw I’d lost pressure. Went to change it and had bought the wrong tubes (valves too short). Went in town and managed to find some 80mm valves so sorted the flat.

Got on the bike and was feeling quite lucky I’d flatted then and not in the race as I’d have been knackered. 17 miles later I got my third puncture and was saved by a Belgian cyclist who lent me a tube (he asked for it to be replaced and would see me after the race😂). I also got a hug from his wife and a rather odd pat on the arse from her as well🤷🏻‍♂️.

In Austria as Sav and I were getting ready we were about to go back to his car to get ready for the start he realised that someone had picked up his IM Austria bag by mistake and had his car keys in…where our wetsuits were! Luckily about 20 minutes before the off the announcement came over the tannoy for Mr Molloy and we didn’t need to do a non wetsuit swim! Do not use free race merchandise on the morning of the race with 2000 others doing the same

Turned up the a race and as I went to fit the rear wheel realised my Skewer was missing. I found it amazingly difficult to find ANYONE with a spare. Even a Guy hiring bike claimed not to have one. Minutes before the start he came through only as a client hadn’t showed!

Before Outlaw 2012 I had ordered a HUGE cheesy pizza the night before as a Carb Load. I think it was the extra cheese that caused the very loose bowls. A big session on the throne with 30 mins to go seemed to clear it.

However as the Starter announced 1 min to go, up to my chest in lake water I turned to my friend who I was racing with and declared. I think I am going to shit myself! my guts were in full free fall, and explosive evacuation was imminent. He moved away from me and the race started.

I’ll never know who I kept it in, but I had another bout of urgency mid swim but kept that in too. I had a long, messy and smelly T1.

SGreg, you elicited my first laugh of a rather shitty day, so thank you for sharing that!

Sure some will remember my 9 months of solid effort getting ready for Lanza and ending up in hospital a week before with a massively infected finger. Op under general and enough antibiotics to wipe out the bubonic plague.