Looks like Finland isn’t the ticket I was expecting. Nearly every age group rolled including a lot of the ladies. One female slot actually rolled back up!

M50 had 3 slots, the third rolled to 9th, 3 ahead of me. I beat him on the bike and run, but sadly he must have been some kind of marine life

saved my credit card at least

Perhaps harder to sell as a ‘weekend away’ than Nice which barely rolled IIRC - plus any travel is an off putting ballache atm.

Ah well, nearly but no banana!

Yea, Unlucky Jeff. Interesting to see if this years would roll - I guess anywhere mainland Europe would be a current hit

TBH I wasn’t sure if I wanted it either, it was more curiosity. Although excitement would have probably got the better of me

I think it’s a big resort but not sure how it would deal with a lot of people.

Monday will be interesting for the full, pretty sure it’s for this year? There’s a small field and I think they’ll roll a long way.

My Mrs is attempting a one and done 70.3 next year, she’ll probably be around the 7hr mark.
But I reckon she’s a realistic chance of Finland WC roll down if she wants it, can’t see many travelling to Europe. Especially given there’s extra women for tri slots.

What’s the point entering an IM 4-5 weeks out from race day with lamentable training year to date, and only signs of worsening performance?

Because I can? Fun? Stupidity?

Obviously I’m trying to convince myself, but it could be either way. Without any race this year I feel like it’s been a waste. Even if I perform worse this year I’ll have a measure of “worse” and I’ll have a 7th Ironman’s worth of experience to gain from for next year. On the downside it could be a terrible experience and cripple my fragile ego for months.

I always wanted to do IM Italy this year, but I could go back to Barcelona for the 70.3 instead. Feels like a cop out though. And Italian food/wine.

I’m not sure I’d enter if knew I’d be a bit shit and potentially not enjoy it. But, if you go in knowing you’re not fully there you could take the day for what it gives you and enjoy as best you can.

It’s the old “how hard could it be?” mentality.

Like post-childbirth, I release hormones which erase my memory of walking the marathon and the pits of despair I dip in and out of.

Really fucking hard is the answer of course.

Really fucking hard is the answer of course.

If i was really out of shape i’d be in the f**k it, just do it camp. But if i was in alright shape, but not great, Then i’d be more tempted to bin it off.

For me the further away from ideal i am, the higher the kick i’d get out of giving it a crack.

As I mentioned I considered it for Maastricht but luckily they didn’t respond in time. In the end I was glad I didn’t. I’d have finished but it would have probably been a miserable day. Although I’m not sure I’d have been that far off a time I could have put in with proper training.

That said the Italy course looks a lot nicer.

I think 70.3 could be a good shout, Barcelona is full but Italy has one the day after the IM.

Thing is, if I’m not near 5h30 I’ll be in a huff. I should really can it. Maybe do self supported ones instead. Less pressure.

Munich AG Sprint yesterday the location, festival and elite events have been great. It was a split transition with late night racking, followed by a 90 min journey back to hotel. Race morning I had to be up at 5am to get to the start so I only got about 3 hours sleep! I never feel too bad on the day just in the evening the sleep deprivation hits!

Different locations to the elites, swim was a beautiful lake just North of the city 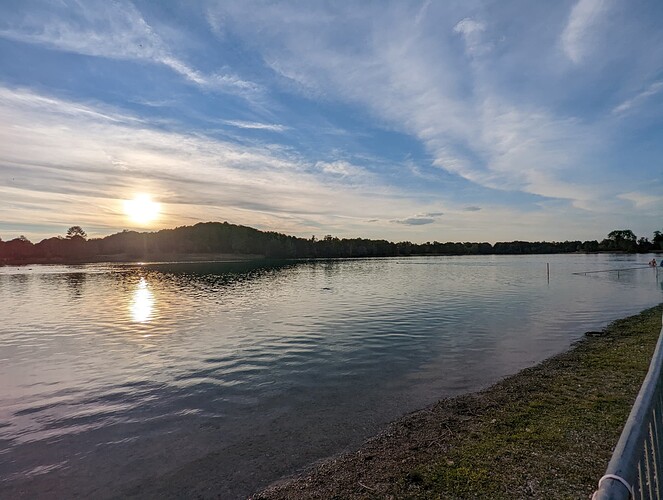 After my shoulder op i try to keep out of trouble in the swim so I went to right and set off like a maniac, first 100m was 1:10

After that I tried to relax and work with some others, came out 4th I think.

I had a great spot in T1 so no risk of not finding bike. 2 lads had decent transition and were gone (only realised at the end). I found myself in a group of 4. I’ve not got much raw power but I managed to stay with and occasionally help out. The route was Flat bike point to point back to the Olympiapark. We caught a big pack of earlier waves (no mix drafting so we pushed on through). We didn’t realise there was a group behind fast approaching

Average speed of high 39km/h for 21k. My power was lower than I’d planned but hard to predict when in a group. Decent dismount and into T2. A game of spot your Nikes!

I’m pretty average on the run so expect people to run past me. 5k run around the park, first km out and back flat. Glanced at my pace, 3:55 /km, I was hoping for 3:45 so quite a bit off. The lads I were with were long gone! My number had ripped off on one side so I was faffing with that

I got to the only hill on the course and 2 people had already passed me. Despite lower power on the bike, I didn’t feel too spritely on the run. Kept pushing through and lost another place about 2ks to go. Held it together for the finish and a little kick as I could feel people approaching. Overall 12th in AG. Pretty happy with that especially as I realised the quicker bike group had made up a lot, so 11 finished less than a minute after me!

I need to keep working on my run. My friend who is 1 min slower than me on 5k TT had the same time as me on the course. Need to decide what I need to do, more brick runs, more miles, more intervals

Well done, the event looked good and Munich is nice.

Great report and draft races adds in so many variables