Any Di2 deals about? The prices I have found range from kidney punch to ballock kick.

Happy to import from europe if anyone knows anything.

Actively looking for a groupset to kit out new ride.
Tt or road?
Loads of road groupset options, tt not so much ?

I have got myself a Scott Foil frame, mostly these are Di2. I did a little research (Not enough it seems) to see if Scott sold a kit to allow cable gears and they do, but this particular Foil has a plugged hole so no chance of running cables so new Di2 kit is has to be. That or move the frame on, as actually I am not that bothered by the Di2 thing.

I ended up taking it to an ex tour mechanic and he fitted it.

It was the first thing I bought when I came back to tri in 14, after doing IMUK on sram 10 speed mech I’m in the same boat as you.

Merlin cycles had a deal in dura mechanical but I think it’s ended.

I would be careful importing form Europe, LBS driller out a stuck plug for me, no problem

Foil is a nice frame!

You can pick up 10 speed Di2 pretty cheap second hand now but I think it’s out of support so a bit of a gamble and restricts your other choices.

Back in the sport after a while, I had intended using my old PX stealth but… its been sitting in my conservatory for 4 years now, and the frame is creaky. I have regreased everything, but I suspect the sun has got to it and its cracked somewhere. I could be wrong, but I now don’t trust it.

Along comes the Foil, used but owned by a featherweight colleague who I know looks after his stuff. I had intended using a fair bit of the kit from my old bike and swapping it over.

They are very expensive as they control the system and can and do fail.

If they have one, go to the Trek Sale in MK at the end of the month. Last year I got a whole Di2 bike (Crockett 9 Disk) in hardly used factory refurbed condition for £500.

Your other option of course is wireless eTap. The only user on here I can remember is @GrahamO

Indeed, in fact I have two now. SRAM Red Etap on the Venge and this weeks addition, an SRM Red AXS 12 speed set on the Wittson Ti bike. 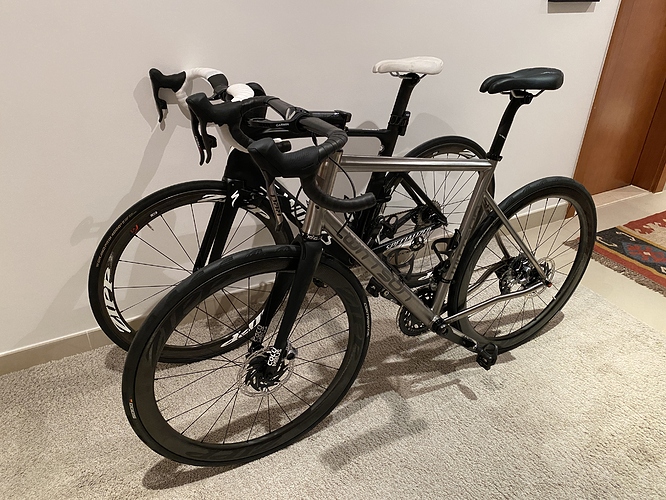 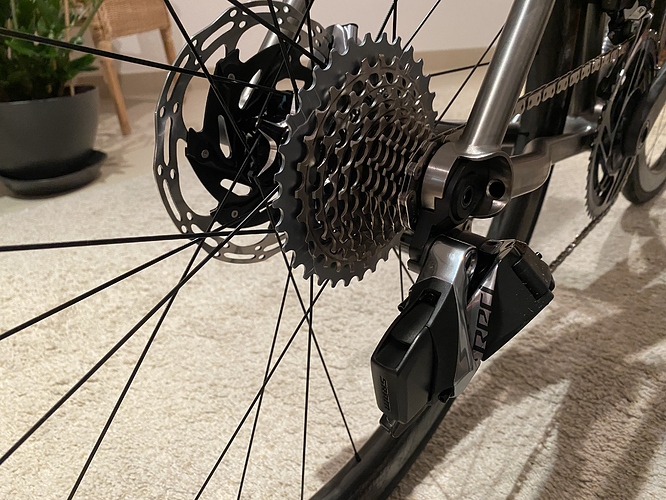 I Have resigned myself that its going to cost some money.

Have you used Di2 at all? is either system superior in the real world?

I’ve had Di2 fitted to my road bike for a number of years. 99% of the time it’s amazing and works faultlessly. Never having to index gears etc…

At the moment after around 3 1/2 years I think my battery has died. I’m picking one up tonight but has meant I’ve been riding around in the 53/21

I would definitely recommend it though

There’s an article on Wittson in Cyclist this month. I had no idea they were Lithuanian!

I have not used Di2 as I just went straight to SRM on the Venge to avoid as many cables as possible.

Yes, the guy who owns them used to be the Colnago Ti frame builder but they stopped doing Ti so now he and his son (Gintaras Zukauskas) build to order for the same price as a standard frame model. I got the idea from a cycling club friend who has one and I decided I needed something for wetter weather when I come back.

They have a very clever ‘shopping list’ which covers dimensions as well as cost saving options like normal ti welds or smoothed out welds, badges vs etched into Ti names etc.

I had them do a few changes such as making sure I could get two large bottles fittedand you can have all the usal additions like mudguard lugs.

And of course, no high import duties when it came here !

Is that a Titanium cassette? Looks like it, and I assumed that was why it’s not ‘machined out’ to save weight.

It is hollowed out on the back side but as it’s 12 speed, the individual gears are so close together that you cannot see the air spaces from that angle.

It is steel but machined from a single block.

My new HotChillee team bike is a Specialized Roubaix with 12-speed SRAM Force E-Tap AXS. I took it for its’ first spin yesterday. Having only ever used Shimano, I think it will take a while to get used to the E-Tap shifting. I don’t find it intuitive to use both levers to shift on the rear mech. I’ve downloaded the AXS app, so I think I’m going to experiment with switching to sequential mode to see how I get on with that.