The timing of this 8 day foreign trip is very handy; Boris gets to avoid the heat like he always does (imagine him having to dodge more interviews). Any Machiavellian colleagues can ‘do a Gorbachev’ on him whilst he’s away

Oliver Dowden: “someone has to take responsibility”

As a party lifer who has always sided with the PM, this was a pretty big statement and one which makes me think Boris’ remaining days are in short supply.

So is it today or tomorrow?!

If he does do it, it’ll be typical flustered Boris banging on about ‘getting on with the job in hand’ and not being distracted by the sh!tstorm he’s created. It will be utter disingenuous head in sand stuff. Assuing that’s what Carrie has told him to say.

What a strange place the USA has become.

Its a country that I’ve spent much of my life admiring, for their spirit and determination…

…but in just one week, they’ve managed to reject efforts to prevent weapons designed for battlefield slaughter, and battlefield slaughter alone, from being available to buy, and removed the right for rape victims to terminate unwanted pregnancies through overturning Roe vs Wade…. all against a background of an inexorable slip towards conspiracy theory and rejection of the foundations of their democracy.

Its like they’ve made a conscious decision to hand the one strong card in their hand, moral integrity, over to China.

Well, they need those ‘shotgun weddings’ now, as abortion not allowed.

The Democrats are ‘in power’ but actually they’re not. As the bible bashing, flat-earthers and their guns seem to actually be dictating all the laws.

The overthrow of Roe vs Wade is a Trump legacy due to the new judges nominated by him during his presidency. Further proof that the guy is a cunt.

A Californian friend of mine has just suggested that this may well be the first step towards California leaving the union.

Absolutely…. but they are increasingly no longer so clearly on opposite sides morally

Utterly disgusted with that

But once they leave the womb and are killed with guns… NOTHING.

Although this ruling should not affect California as the excuse used to overthrow RvW is that it should be decided at state level and not dictated nationally.

So apart from not wanting to be associated with their neighbour states, California does not need to secede to keep their own rights.

California is about as far from the Bible Belt, as the UK is from Ukraine…

I bet this religious map somewhat correlates to gun ownership too… 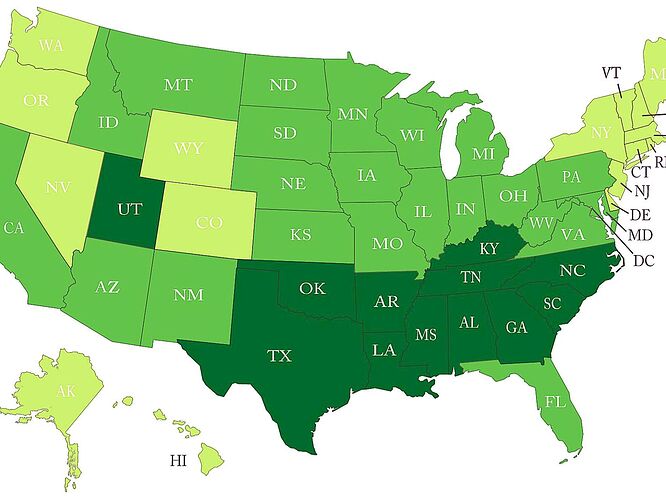 Although this ruling should not affect California as the excuse used to overthrow RvW is that it should be decided at state level and not dictated nationally.

So apart from not wanting to be associated with their neighbour states, California does not need to secede to keep their own rights.

I suspect their fear though, is the inevitable challenges coming to other progressive rights, such as same sex marriage and access to contraception… which the conservative judges seem to have in their sights. They may be able to set their own course, but imagine a world where someone taking the pill becomes unable to leave their own state without risk of prosecution!

An American friend (lives in Georgia but is very much a Democrat) posted this to her FB page. Very apt. 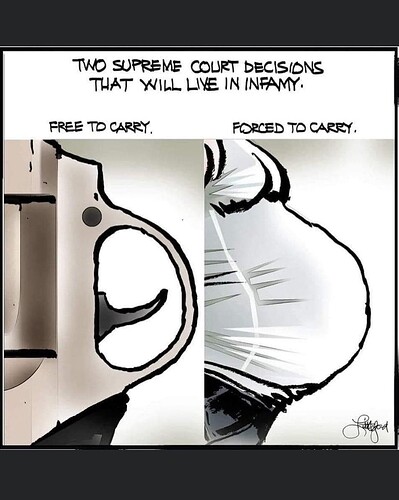 It’s certainly scary stuff, the sort of fundamentalism you would associate with countries america normally goes to war with. So much for the land of the free.

Exactly what’s in my head. Scary.

I know there are tonnes of other injustices across the world, but I guess this one feels particularly close with it being America (as you say above Buzz) and also now having two daughters. I simply can’t imagine having to experience what some very unfortunate people will inevitably have to live through in the near future.